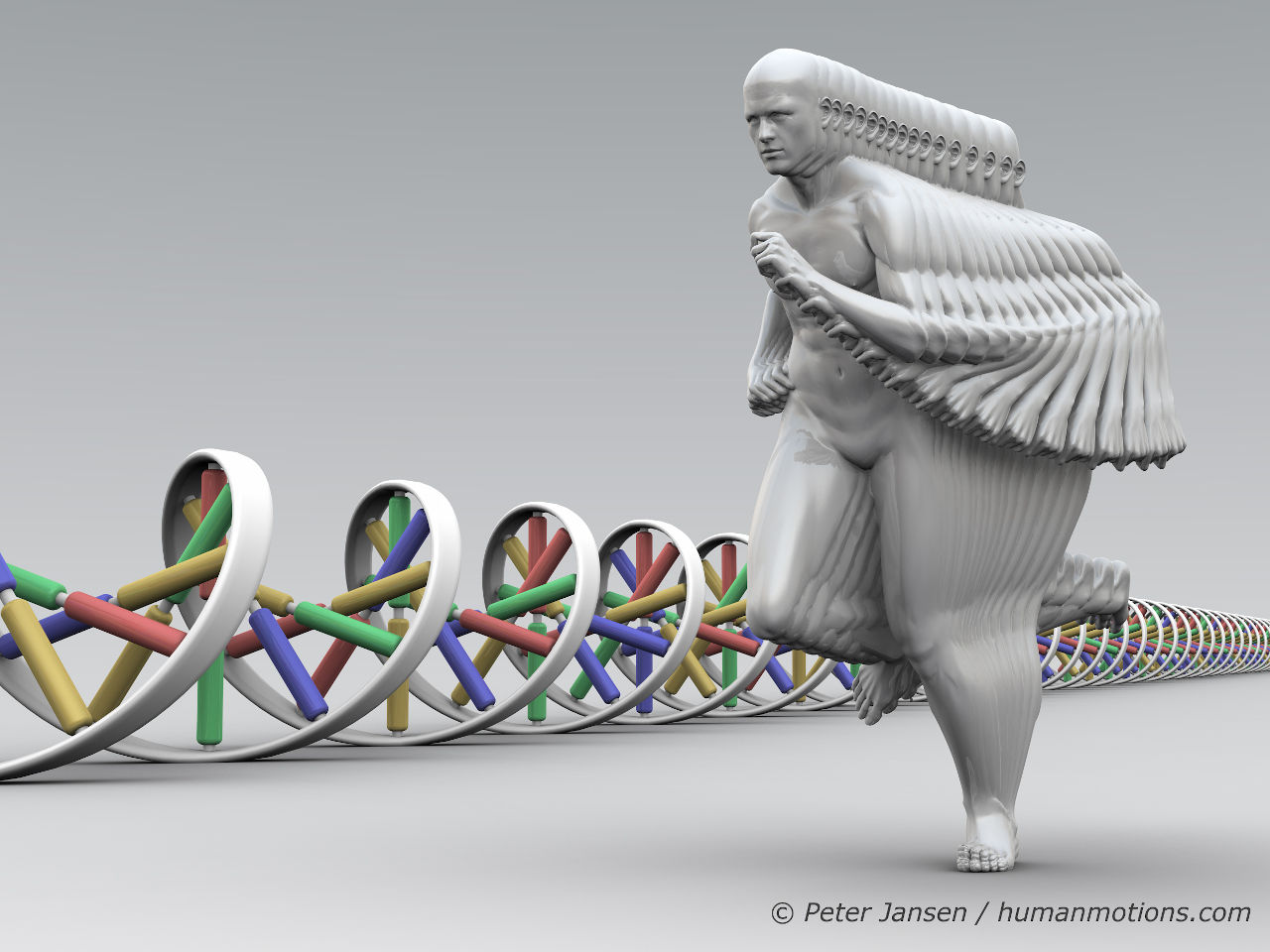 The vision is to improve human health by evidence-based decision support tools for diagnosis and treatment through a better understanding of the specific nature of human motion and its consequences for mind and body.

The core of the institute is the development of an open collaborative technology platform for the mobile medical monitoring of human motion. This leads to a biomedical data warehouse for collecting, archiving, analysing, and disseminating human motion data including a library of algorithms. Key underlying scientific areas of computational medicine are: mathematics, physics, biostatistics, biomedical engineering, computer science, and imaging.

2. Therapy oriented Human gait is remarkable. It is the basis of human motion – gait and movement disorders are the hallmark of many disabling diseases. And yet: Motion is a blockbuster drug in its own right. A daily "dose" of 30 to 45 minutes of brisk walking has shown strong beneficial long-term effects for many suffers and is even able to decrease mortality in several significant diseases.

To measure human motion the actibelt® was developed. The actibelt® is a research tool that allows to study physical activity in a large number of diseases. actibelt is a joint development of the Human Motion Institute and Trium Analysis Online GmbH (trium.de). For more details please visit: actibelt.com

The Human Motion Institute is expected to have a long-term impact on the development of novel interdisciplinary fields, as well as being a stimulus an place for the development of a critical path toolkit (Critical_Path_Initiative_Report).

In 2000 Trium joined forces with the Institute for Medical Statistics and Epidemiology of the Technical University of Munich (at that time headed by Prof. Neiß) to respond to a request to form an "International MS Trials, Research and Resource Centre - IMSTRaRC". The proposal from Munich was successful and a 5-years contract with a total volume of 5m € was awarded from the Multiple Sclerosis International Federation (MSIF) to Trium and the TUM. The original aim was twofold: a) improving the prediction of the disease by advanced mathematical modelling - maybe leading to virtual control groups, and b) evaluating the use of MRI measures as potential surrogates for the disease course.

The Sylvia Lawry Centre for MS research (SLC) was founded by representatives of MSIF, TUM and Trium in 2001 as an independent legal entity with long-term prospects for research and development. Since then, the SLC has built the world's largest collection of MS data sets coming from placebo arms of clinical trials and natural history studies. All major pharmaceutical companies and academic centres have contributed data free of charge to the Centre, in total (as of July 2008) data from roughly 26100 patients summing up to almost 100600 patient years. Also in 2000 Trium Analysis Online and TUM were successful to obtain a 3-year grant from the German Federal Ministry for Science and Education to develop a universal platform for "Mobile Medical Monitoring" with a multi-purpose biomedical measurement tool called "medshirt". The medshirt and the corresponding platform were developed and a wearable prototype was shown to be able to record, transmit and analyse high resolution ECG data as well as other biosignals together with GPS information. In the following years multiple eﬀorts were made to exploit potential synergies between these two ﬁelds of MS and mobile medical monitoring.

It became increasingly evident that the deﬁciencies in the widely used outcome measures that arose during the analysis of the SLC database cannot be reasonably dealt with by more advanced statistical modelling. At that point a more radical change seemed to be necessary and the idea emerged to use the essence of the medshirt technology to develop a universal platform for the mobile monitoring of disability: the "actibelt®", essentially a medshirt compressed into a belt buckle, all sensors but the most essential one removed: the 3D acceleration sensors, that would give meaningful information about the motion of the body's centre, certainly the most basic starting point when one attempts to quantify human motion, at least from a physicist’s point of view.

Trium Analysis Online and subsequently the SLC became partners of one of the major post human genome projects: "bloodomics" and "cardiogenics", both multi-million euro integrated projects with the focus on genome-wide cardiovascular diseases funded by the European Union. Trium's responsibility was the development of an IT platform to pool the clinical data and link this Patient Information Management System "PIMS" to the "LIMS", the Laboratory Information Management System that is hosted at the Wellcome Trust Sanger Institute in Cambridge, UK.

The SLC had been stimulated to broaden its basis by trying to apply the concepts which had proven to be the tetrahedron modeluseful in MS research to other areas. As a next field of interest cardiovascular disease was chosen. The overarching "tetrahedron concept" was developed. tetra Advances in imaging technology, genetic / genomics and biosignal analysis carry all the potential to improve clinical decision making. Our concept is to evaluate the additional value of these areas to multivariate statistical models based on classical clinical variables that describe the phenotype of a speciﬁc disease - "phenomics". 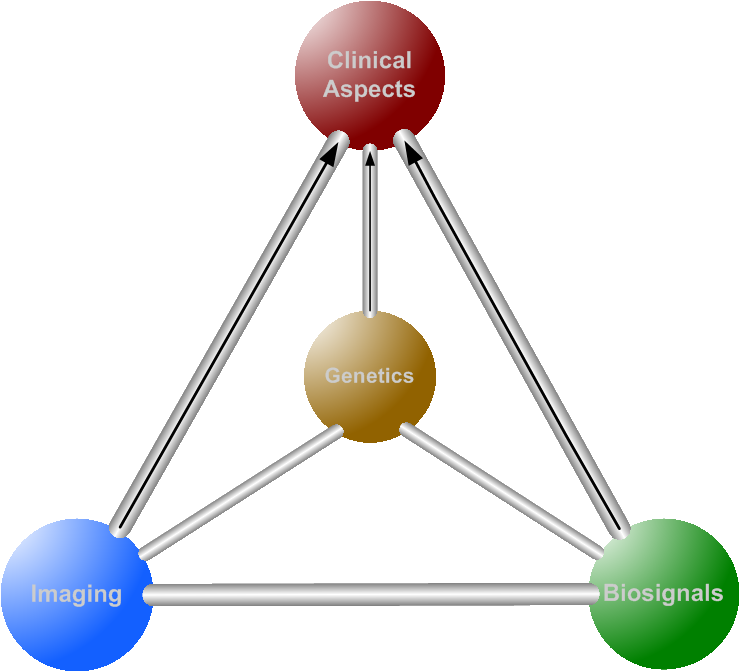 Typically it is difficult to validate an improvement of classical prediction models. The most promising candidates with a broader spectrum of possible applications seem to be those biosignals that are related to human motion (3D accelerometry). In contrast to the Human Genome Project and its successors, where even basic concepts such as "genes" are becoming more and more vague and are still far away from the original stretch goal to develop individualised therapies, the Human Motion Projects deals with entities that are inherently meaningful for human health: human motion always matters, whereas speciﬁc genes and MRI images don’t necessarily. In many diseases physical activity plays a dual role as a meaningful outcome measure and treatment option. The tetrahedron concept can be transferred to a number of diseases.

The Human Motion Institute - one step further towards the Human Motion Project The research team is rapidly broadening their capability to pursue their new mission in MS and an increasing number of other diseases: "evidence-based decision support tools for better clinical choices". The SLC has an excellent track record of successful implementations of public private partnerships, to serve as a productive host for international collaborative research, to develop evidence-based decision support tools and to deal with the complexities of maintaining scientific independence while encouraging their entrepreneurial development. The human motion project is a natural development and extension based on the results of systematic patient-based meta-analyses in the field of MS. 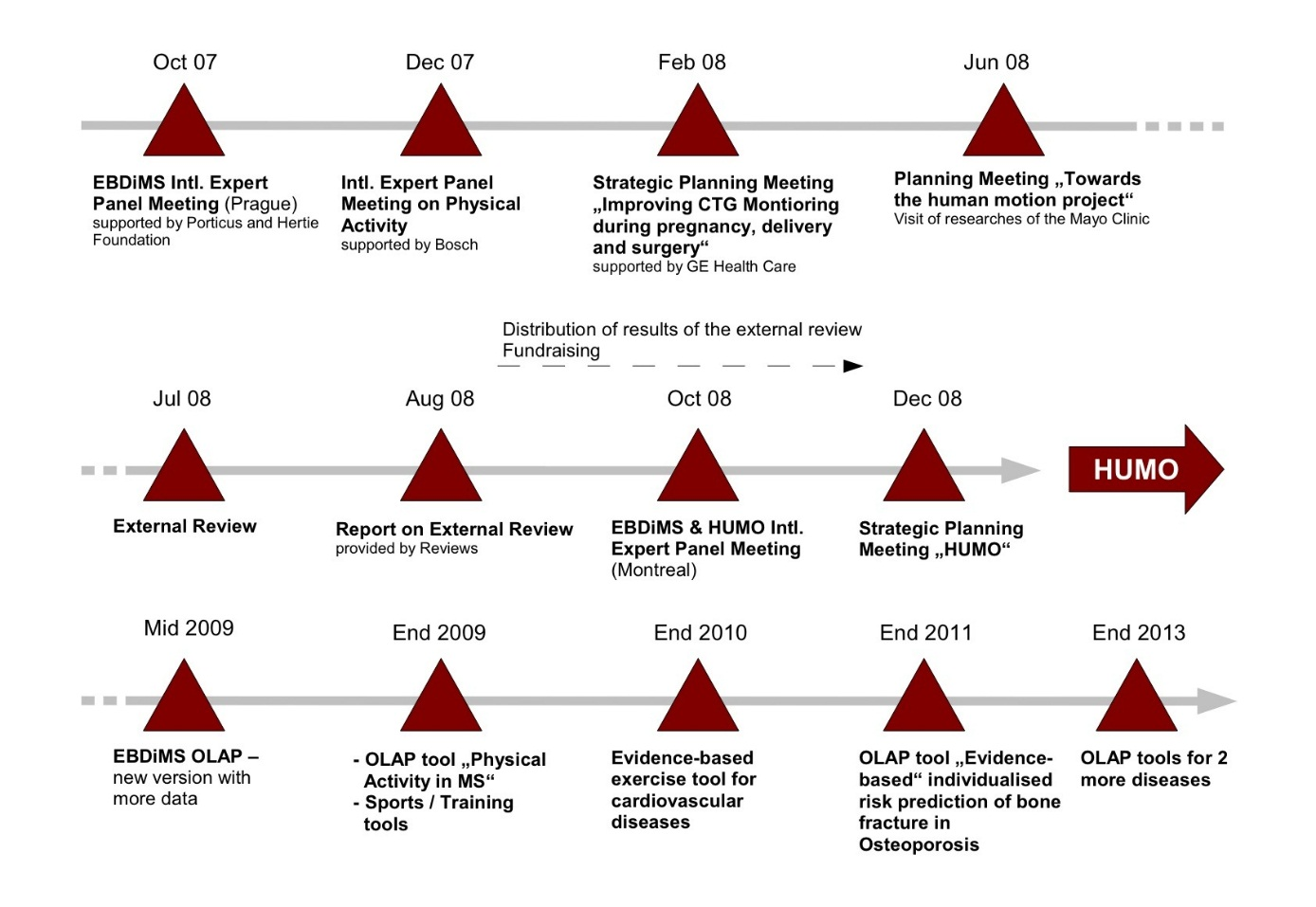